In this post, we will mainly focusing on avengers games and avengers characters games only. These avenger games will be super awesome as I personally have played all of them and then made a list.
All the Marvel avengers games we will talk about, will be free of cost and  will be available on play store, so don’t worry, you don’t need to download apk’s and all.
The sequence of the top 19 Marvel Avengers Games are not based on ratings instead they are based on my experience after playing the games.
The top list starts here

Another Marvel game for Thor lovers, this is a new game and played by only 1000 people but ratings are awesome. I also have played this for a long time.
I will refer this game for kids as they are going to love it but if you’re searching for some good graphics game or a game that looks real then this one is not for you.
Marvel Avengers Game info
Downloads – 1k +
Download size – 68.05
An online game
DOWNLOAD BY PRESSING HERE

A marvel game of Captain America and Iron Man. Best action fighting free-to-play game for your phone or tablet. An assault on Earth has begun and Iron Man and Captain America are working together to defend it!
Marvel Avengers Game info
Downloads – 10,000+
Download size – 35.29 MB
Ratings – 4.1
DOWNLOAD BY PRESSING HERE
Must read: Does Narendra Modi play Player unknown Battleground

An amazing action game for Wolverine and action lovers.
Kill all of them with the sharp claws.
App info
Downloads  – 100,000
Download size – 69.22 MB
Ratings – 4.3
DOWNLOAD BY PRESSING HERE

Another marvel avengers Thor game in which we use Thor’s hammer and destroy your enemies and pass the chapter.
Marvel Avengers Game info
Downloads – 50,000+
Download size – 34.50
Ratings – 4.3
DOWNLOAD BY PRESSING HERE

An Avengers game for the people who loved the movie Avengers infinity wars and end game. In this game, you have to beat Thanos. Its ratings are not good but according to me, it’s an excellent game.
Marvel Avengers Game info
Downloads – 10,000+
Download size – 44.36 MB
DOWNLOAD BY PRESSING HERE

In this marvel game, you will go level by level with an opponent that will get stronger at each level, and at the end of the game, you will meet the God of Universe. find time stone, power stone, space stone, soul stone, a reality stone, mind stone universe to win the battle.
In this game, there are all Avengers and all Marvel heroes and villains. They have a fight together. It’s a good game but it has only one demerit that in these heroes or villains can’t use their superpower, they only have a hand to hand fight no UI use besides this, the game is a great game according to me.
Marvel Avengers Game info
Downloads – 50K+
Download size – 66.46MB
Ratings – 4.2
DOWNLOAD BY PRESSING HERE

I know that this is not a game but a good marvel app that’s the only reason that I added this in my list. The keyboard theme is so amazing that my friends also loved the app.
PRESS HERE TO DOWNLOAD 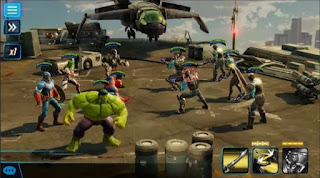 Another game for black panther fans, which is an amazing game. In this game, you can Be a superhero and fight like a superstar in the city and complete the survival.
App info
Downloads – 50,000+
Download size – 99.93 MB
Ratings – 4.3
LAST UPDATED ON – 14 April 2019
PRESS HERE TO DOWNLOAD

2. Guardians of the galaxy TTG

I know this is not a marvel avengers game but still I added this in my list as this game is super awesome.
Are you a fan of the guardian of the galaxy? If yes, Then this game is for you.
Marvel’s Guardians of the Galaxy: The Telltale Series delivers a brand new story of the universe’s unlikeliest heroes, the rag-tag band of outlaws who go by the names Star-Lord, Gamora, Drax, Rocket, and Groot. In the wake of an epic battle, the Guardians discover an artifact of unspeakable power. Each of the Guardians has a reason to desire this relic, as does a ruthless enemy who is the last of her kind, and who will stop at nothing to tear it from their hands.
This game doesn’t have good ratings but according to my game play, it’s an amazing game.
App info
Downloads – 100,000+
Download size – 1.18 GB
Ratings – 4.1
PRESS HERE TO DOWNLOAD

Here comes the no.1 Marvel Avengers game on my list, this game is the best Marvel Avenger game I ever played.
Collect over 180 Marvel Super Heroes and Super Villains to assemble your ultimate team.
– Level up your characters and their gear to unleash their full powers!
– Build classic teams like the Avengers or X-Men to take advantage of special bonus effects.
– Choose from hundreds of Uniforms to increase your character’s powers and perfect your hero’s look.
Upgrade powerful characters in Epic Quests!
– Get everyone’s favorite Super Heroes, from Captain Marvel to Doctor Strange, and level them up while playing thrilling Epic Quests.
– Unleash each character’s unique superpowers as you make your way through various missions. Blast enemies with Iron Man’s Unibeam and bash opponents in the name of justice with Captain America’s shield!
– Experience even more thrilling action in PvP Arena modes, where you can bring your best team to take on the world.
The best Marvel Avengers game information
Downloads – 50,000,000 +
Download size – 80.10 MB
Ratings – 4.6
PRESS HERE TO DOWNLOAD
I hope now you’ve gonna rock in these games and be a champion hero.
I hope you enjoyed the post, share this if you really liked it and comment who is your favorite Avenger and why? Mine is Captain America.
Thanks for reading!


Posts I especially wrote for you:

Hii, I am Aaditya Sharma founder of Exblogging. I am big tech-savvy and I love to create different types of content for various social media platforms. I teach people to make money online and create amazing content. Fun fact about me - I am always lying on the bed using my laptop and thinking about making some money

link to How Long Should an Ebook Be For Better Sales?

A good ebook that sells more and is loved by everyone is never too short and not too long. To make your ebook sell more, you need to make sure that your ebook is long enough to be helpful for...

How To Run Exe Files On AndroidThis article tells you how you can run EXE files on your android phone easily with three different methods.For those who don’t know, .exe is a common filename...