21 Tips to Make and Run a Successful Clan 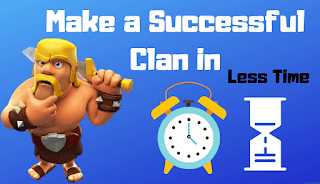 Making a clan is easy in Clash of Clans

but Making a successful clan is hard and it’s not a child’s play. You might have made a clan but it is not going on correctly and not able to generate members. Here I have a solution for you, 21 Tips to Make a Successful Clan in less time or 21 Ways to Get Clan members fast in Clash of clans.

If Your clan is not successful or not having good players then these 21 Tips To Build a successful clan is for you only.

These tips are based on my clan leader experience as I am a leader of a level 13 clan so I want to share some tactics that made my clan grow.

I am pretty sure that after reading this article, you will be able to build a successful clan in the clash of clans in very little time.

Here are 21 tips and tricks by which you can make a successful clan in clash of clans very easily.

So tips and tricks are as follows :

If you enjoyed this post, I’d be very grateful if you’d help it spread by emailing it to a friend or sharing it on Twitter or Facebook.

Before I end up, I would like to present a Quote:

The sky takes on shades of orange during sunrise and sunset, the color that gives you hope that the sun will set only to rise again.

Hii, I am Aaditya Sharma founder of Exblogging. I am big tech-savvy and I love to create different types of content for various social media platforms. I teach people to make money online and create amazing content. Fun fact about me - I am always lying on the bed using my laptop and thinking about making some money

link to How Long Should an Ebook Be For Better Sales?

A good ebook that sells more and is loved by everyone is never too short and not too long. To make your ebook sell more, you need to make sure that your ebook is long enough to be helpful for...

How To Run Exe Files On Android This article tells you how you can run EXE files on your android phone easily with three different methods. For those who don’t know, .exe is a common...